Epcot’s Festival of the Arts with kids

Epcot’s Festival of the Arts is back for its fourth year, and of course we were there on the first day to see what was new for this year. With amazing art, fantastic food, and performances by Broadway stars, this is one of my favorite Epcot festivals (and the fact that it’s held in winter when temperatures are reasonable makes it even better!) If you’re visiting Epcot Festival of the Arts with kids then read ahead for all you need to know about the best things to do, see and eat with little ones in tow.

For more information on the other Epcot festivals, read through my posts on the Epcot Flower and Garden Festival, the Epcot Food and Wine Festival, and the Epcot International Festival of the Holidays.

Epcot’s Festival of the Arts with kids

The Art at Festival of the Arts

With the name being Festival of the Arts, you would assume that this would be the main focus of the event, and to some extent, it is.

There are a number of seminars covering a wide variety of mediums going on over the course of the event; these include classes on Ink and Paint Animation and Disney 3D Paper Crafting. The seminars are an additional fee on top of park admission, and seats are limited so be sure to book ahead if you think you might be interested. To book a class, call 407-WDW-PLAY, and for a full list of the seminars available, go to the official Festival of the Arts website.

Outside of the seminars, there is plenty of other art to look at and interact with. Festival galleries are spread out around World Showcase, featuring both Disney and non-Disney artists, showcasing a wide variety of talents. Many of the artists featured are there at the festival to meet, and some are even creating new pieces while you watch. They’re happy to chat about their work and it’s really cool to watch the process of something being put together.

There are some really interesting artists showcasing amazing talents, including paint spinning and marbling. Harrison was really interested in some of these, and even though this wasn’t something the kids could necessarily get involved with, they were both interested to watch.

There is also an amazing interactive mural being created in the World Showcase Plaza that we had a great time being part of. Guests are assigned a number, a pot of paint, and a paintbrush, and then instructed to paint five squares (only five!) with their number on – kind of like paint by numbers! There was a line to participate in this throughout the day so it seems very popular, and I can’t wait to see the finished product when it’s complete (a Cast Member gives you a postcard of what it will look like at the end!)

There were also fantastic pastel chalk paintings, which were being worked on throughout the day. We got chatting to one of the artists who mentioned that she’d actually been terrible at art in school, but had really gotten into it since then and now it was her biggest passion, which I love.

There are other visual artists around the festival, including acrobatics performed on the Showcase Plaza stage, and living statues. I decided I need to have these guys teach my kids how to stand this still!

Again, my kids were really interested in watching the artists work and Harrison loved trying to guess what the finished product was going to be. There was even a kids chalk area where kids could play around with sidewalk chalk and be as creative as they like. Grayson was happy to play with this for ages!

The Food at Festival of the Arts

Let’s face it: this was really why I was there. Epcot’s Food and Wine Festival in the fall always used to be the only place where the portable food kiosks popped up everywhere to offer new culinary delights, and then the Flower and Garden Festival in the spring got in on the action. With Festival of the Holidays finishing up the festival season, there are food booths in Epcot throughout most of the year at this point, and it’s always nice for some of the food offerings to be fresh and new.

The food at the festival is fabulous! Where the Food and Wine Festival food has gotten a little repetitive over the years, the food here is an absolute standout. Not only are there some new and exciting options, but they are definitely part of the art experience.

The food is beautifully prepared, with lots of really unique creations and some really fun deconstructed dishes. The fact that so much thought goes into the food presentation means that sometimes you do have to wait a little longer at the food booths for everything to be prepared, so do bear this in mind.

These were some of our favorite options as part of the Festival of the Arts this year:

Agave Pork Belly from El Artista Hambriento – this is caramelized pork belly with agave on a bed of pumpkin seed pesto lentil salad, and it is delicious! The salty sweetness of the pork belly pairs perfectly with the heart lentil salad and it ends up being a filling dish that’s still very light.

Vanilla, Rose Water and Pistachio Panna Cotta from The Masterpiece Kitchen – I originally thought this was a bit pricey at $8 for just a dessert, but it was a really good size and SO pretty! This had a definite rose water flavor so if that’s not your thing then this might not be something you enjoy, but it’s not too sweet and actually very light.

Paintbrush Churros from Refreshment Outpost – Grayson absolutely loved these, so much so that I didn’t even get one bite! They were a fun way to dress up churros a little.

Sushi Donut from Takumi Table – this is a good option for kids who might be a bit more adventurous, and both Grayson and I really enjoyed it. We did have quite a wait for this since they’re handmade and time is taken to make sure they really do look beautiful but they were worth the wait.

The Merchandise at Festival of the Arts

As with any Disney special event, there is some new merchandise released, this time featuring the festival’s mascot, Figment. I’ve always loved Figment, and I love that he’s getting some attention outside of his ride (which I’m not the biggest fan of!) The merchandise includes things like t-shirts (including an exclusive Annual Passholder shirt), hats, mugs, travel mugs, and bags.

As well as the official Festival of the Arts merchandise, there are other vendors in the parks with unique offerings as well. I wanted pretty much everything at the Sugarboo & Co. booth, particularly these canvas zip bags.

The Music at Festival of the Arts

My very favorite thing about Festival of the Arts (besides the food, of course!) are the concerts featuring Broadway stars. I love musicals of all kinds, but I admit that I have a real soft spot for Disney musicals. In years past, the concerts have featured performers such as Ashley Brown, Josh Strickland, and Kevin Massey (all of who are returning this year) as well as some new artists this year like Syndee Winters and Michael James Scott.

We always take the time to watch these concerts and they are always absolutely amazing, with stars singing songs not only from the Disney musicals they have been in, but other Broadway shows. Harrison is a huge fan of musical theater so this is one of his favorite things about the festival!

There are three shows a night (at 5.30pm, 6.45pm, and 8pm) and the performers will change over the course of the festival. There is also a dinner package available at a variety of Epcot restaurants. For a list of performers and more information on the dinner package, go to the official Festival of the Arts website.

Overall, this festival is a great addition to Epcot, and something I would highly recommend experiencing if you visit Walt Disney World while it is going on. January and February don’t typically have a lot going on at Walt Disney World, and it’s actually really nice to be able to experience a special event while crowds are a little lower, and temperatures are mostly very comfortable.

There was a lot for the kids to see and do, and they both really enjoyed spending time at the festival. I really hope this is an event Disney continues to put on long into the future. 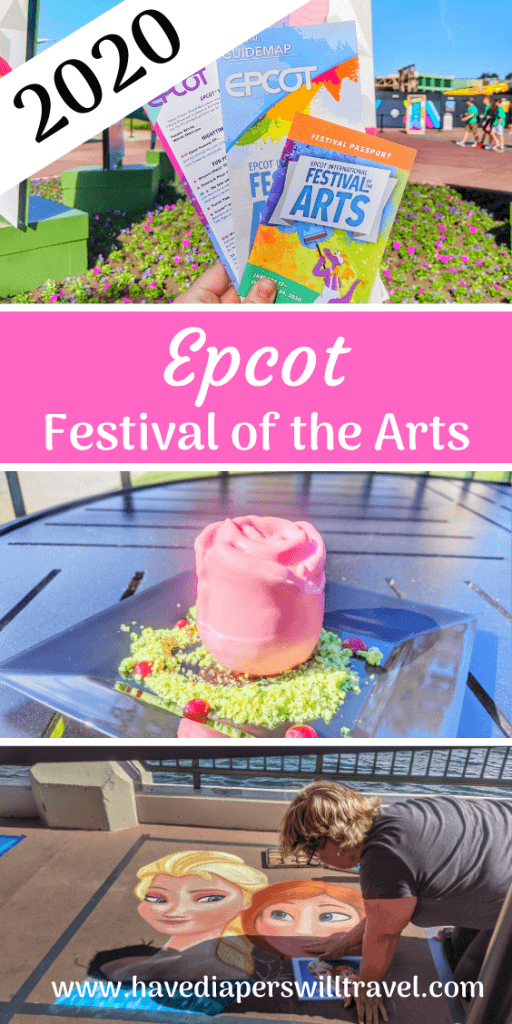 Did you visit the festival this year?

Staying onsite or offsite for your Disney World vacation
← Previous
Christmas in England; a recap of our family trip
Next →
Comments are closed.