There are many different reasons for a long layover on a trip: it might mean the price of the flight was a little cheaper, or it was the only option for the times and dates that worked for you – or it might be that you saw a long layover as an opportunity to see a little bit of a new city before carrying on to your destination.

A long layover in London is a great opportunity to see a little of the city and there are some great attractions near Heathrow Airport that you can see in a few hours. There are, however, definitely some practical considerations if you’re planning a long layover in Heathrow and not every London attraction is going to be a good fit to see in a short time. Read ahead for everything you need to know about how to spend a layover in London and the best attractions near Heathrow Airport.

Please note: this post covers layovers at Heathrow Airport – if you’re flying into Gatwick Airport (London’s other major international airport) then these options probably won’t work for you.

Practicalities to a long layover in Heathrow

Do you have enough time?

What may sound like a long layover at Heathrow Airport might actually not be enough time to leave the airport and visit the city of London. I fly into London often enough to know that immigration lines at London airports can be more than a little excessive and the airports themselves are often very busy.

Depending on your nationality and the type of passport you are entering the UK on (because even on a layover, you’ll have to go through customs) you might find yourself standing in an immigration line for an hour or two before you even get into the main body of the airport.

Similarly, international flights often recommend you arrive at the airport three hours before a trip so you’ll need to be back at the airport with plenty of time to spare at the other end.

All of this means that a layover of at least four hours is actually the minimum  suggested to transfer at Heathrow, let alone attempt to leave the airport.

I would suggest that you need a layover of at least eight hours, preferably more, in order to comfortably get in and out of the city and actually enjoy your time exploring without being stressed about getting back to the airport on time.

What to do with your luggage

Ideally, you’ll want your luggage checked through to your destination; this way, you wont have any extra bags to worry about.

If you do have to collect your bags though, you definitely don’t want to attempt to take them with you; all luggage, including car seats, should be left at the airport.

There is a luggage storage facility at Heathrow operated by the Excess Baggage Company where you can leave your luggage – prices vary but are generally pretty reasonable and can be found in each of the terminals.

There are several options for getting into London but the quickest and easiest is going to be the Heathrow Express.

The Heathrow Express runs from Heathrow to Paddington Station and the cost is pretty reasonable as long as you buy in advance (30 days in advance is the cheapest option but there’s also a good saving 14 days in advance – it gets pretty pricey if you try to buy much closer than that!)

The train journey lasts just 15 minutes so this is definitely your quickest option. From Paddington you can jump on a tube to get to where you want to go or you can get on a hop on hop off bus that goes to many of the major tourist attractions.

I would recommend buying any tickets you need ahead of time as well as researching which tube lines or bus routes you need to take to get to your destination to save as much time as possible.

Attractions near Heathrow for a long layover in London

Kew Gardens, otherwise known as the Royal Botanical Gardens at Kew, are one of the best places for a layover in London because there’s plenty of outdoor space to get some fresh air and stretch your legs between flights; chances are that if you’re on a long layover, you’ve been on the plane or in an airport for a while and getting the chance to walk around is such a treat!

If you’re an avid gardener then there is so much to see, from the Temperate House filled with some of the world’s rarest plants to the Treetop Walkway where you can see the most amazing views of the gardens to the 37 acres of woodland that make up the Natural Area.

Visiting with kids: there is a brand new interactive children’s garden where kids ages 2-12 can burn off all of their energy before the next flight!

Kensington Palace, once the childhood home of Queen Victoria is now the official London residence of the Duke and Duchess of Cambridge, and makes for a perfect place to spend a long layover in London; there is enough to do to keep you occupied for a few hours, plenty of green space to walk around, and yet you can see most of what is on offer within that time frame so you won’t feel too rushed.

Walk through the King’s State Apartments, see some of the finest paintings in the Royal Collection in the King’s Gallery, get some fresh air in the Kensington Palace Gardens, and take in the history of the beautiful palace.

Visiting with kids: if you have a little extra time, then the Diana Memorial Playground is just around the corner. This is one of the most famous playgrounds in London and is an amazing place for kids to play.

Safety is their number one concern and no adult will be allowed to enter the playground unless they are accompanying a child and the park is permanently attended during opening hours to make sure everyone is kept safe.

The British Museum is a fantastic place to visit on a layover in London, partly because entry is free and partly because it’s a large space that you can wander around without too much effort if you’re feeling a little jet lagged or disoriented after a flight. There are numerous different permanent and visiting exhibits so there’s always something new to see, and there are free narrated talks that occur throughout the day.

Visiting with kids: on weekends the museum offers free gallery backpacks with activities and information on topics like African Adventure and the Egyptian Mummy to keep kids interested and engaged. There are also different age appropriate family trails that takes kids throughout the museum to learn about subjects like Ancient Greece and Creatures.

The Coca Cola London Eye is quite literally one of the best places to see as much of London as possible! The London Eye is a giant ferris wheel that moves very slowly so you can see out of the enclosed pods over London for as far as the eye can see (and the weather will allow!)

Visiting with kids: the enclosed pods have screens that show what it is you’re looking at so it’s easy to point out to kids the famous London landmarks such as Big Ben and the Houses of Parlaiment, Buckingham Palace, St Paul’s Cathedral, and more.

Windsor Castle and the town of Windsor

Windsor Castle, home to Queen Elizabeth II, is the largest and oldest occupied castle in England. The castle holds over 900 years worth of history and it’s fascinating to walk around the State Apartments used today by members of the Royal Family. Within the castle grounds you can also visit St George’s Chapel which recently held the Royal wedding of HRH Prince Harry and Meghan Markle.

The town of Windsor is a great place to walk around if you have some free time after visiting the castle, where you can visit Eton College (where princes William and Harry were educated), walk along the Thames river, or visit the Alexandra Gardens.

Visiting with kids: if you’re visiting on a Tuesday, Thursday or Saturday you can watch the Changing of the Guard at 11.00am. The guards march through the town of Windsor into the castle where they change places, and it’s quite something to see! Be sure to double check the website ahead of time to make sure nothing is going on at the castle that might change the schedule.

If you’re spending a few days in London think about taking one of these fantastic day trips from London during your trip! 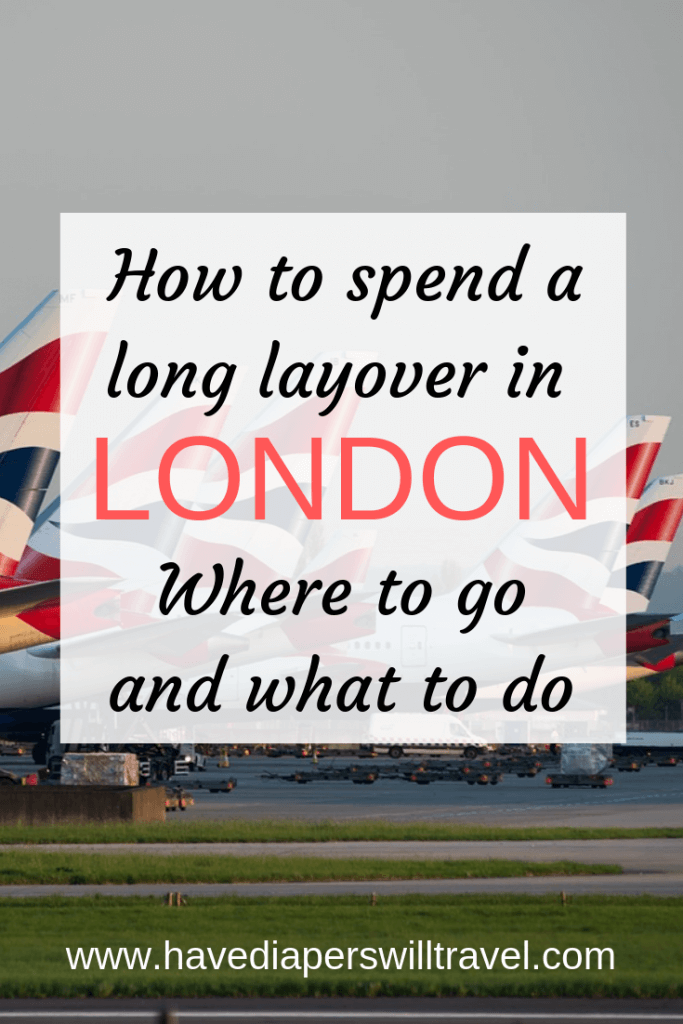 Have you ever spent a long layover in London? What are your favorite attractions near Heathrow?

This is PERFECT for our next layover in London!! Also - gorgeous photos!

Great tips! Especially about buying the express ticket more than 30 days in advance. London is already an expensive enough city so any savings will be very helpful. Beautiful pictures too! Makes me want to take my kids soon.

OOH, this looks great! London is my favorite city, definitely going to save this!

This is brilliant. Normally I would just resign myself to hanging at an airport for the day and being bored. Now I'm hoping for a lay over at Heathrow to explore London next time I head to Europe!

Great tips! We were so close to riding the London Eye...but ran out of time.