If you’re planning a trip to Walt Disney World then you’re probably getting ready to book your FastPasses for your trip – but until you understand the Disney World FastPass tiers, you might be confused on why you can only book certain rides and not others. This guide explains the FastPass tiers so you know exactly what you can and can’t book, as well as recommending some of the best rides to use your FastPasses for – and some insider FastPass secrets that will help you get on as many rides as possible during your trip!

Please note: FastPasses have now been retired from Walt Disney World, and replaced with a new service. For more information on Disney Genie, Genie+ and Lightning Lanes, click here.

What are Disney World FastPasses?

First thing’s first: what are FastPasses? These are essentially your ticket to getting on to a ride with a much shorter wait than the standby line. FastPasses at Walt Disney World are completely free and offered to every guest that enters the park with a valid ticket, regardless of where you’re staying or the kind of ticket you have.

Guests may book three FastPasses a day and once these three have been used up, they can book as many more as they like, one at a time. All three of the original FastPasses must be booked at the same park but after that, they can be booked wherever you like.

Your FastPass booking date is one of the most important booking dates for your Disney World vacation so it’s definitely something to take note of.

What are the Disney World FastPass Tiers and how do they impact my choices?

The first thing to note is that the Disney World FastPass Tiers only impact three of the four Walt Disney World theme parks – Magic Kingdom does not have a tier system, so you can book whatever FastPasses you wish at that park.

Secondly – what are the Disney World FastPass tiers? The tiers are essentially a way of dividing the rides at a particular park into categories, and then you have to choose your FastPasses from those categories.

Once you have used your three FastPasses for the day, you are free to book your next FastPass in any tier, regardless of what you have already used.

FastPass Secrets insider tip: book your FastPasses as early in the day as possible, so that as soon as your third one has been used, you can book another…and another…and another! There is no limit to how many FastPasses you can book during one day, and once those first three are used, you can even book them at a different park, so definitely take advantage of this option!

From Tier One, I would recommend booking either Test Track or Frozen Ever After, depending on your travel party. If you have young children with you, Frozen Ever After will be the obvious choice, not least because everyone can ride this ride whereas Test Track has a 40 inch height requirement.

If you’re traveling with older children, or no children at all, I would recommend Test Track since this ride typically has the longest lines throughout the day. Soarin’ is often available as an additional FastPass later in the day, and usually has shorter waits if you want to wait standby.

From Tier Two I would recommend Spaceship Earth and the Character Spot, both of which usually have longer lines. None of the other rides ever really have waits of more than 30 minutes at the very most, and all will most likely be available as an additional FastPass later on in the day.

As of February 19th 2020, Hollywood Studios FastPass tiers are changing and – in my opinion – for the better! The new tier system allows you to ride a great variety of the most popular rides in the park by placing more of them in the second tier.

Millennium Falcon: Smuggler’s Run and Mickey & Minnie’s Runaway Railway have been added to tier one for the Hollywood Studios FastPass tiers. Slinky Dog Dash is also in tier one, but the rest have all been moved to the second tier.

Even with Millennium Falcon: Smuggler’s Run and Mickey & Minnie’s Runaway Railway being the newest rides in the park, I would still suggest choosing Slinky Dog Dash as your tier one FastPass; this typically still sees longer wait times than Smuggler’s Run, which doesn’t tend to see such long waits, especially in the early morning.

Mickey & Minnie’s Runaway Railway is sure to have longer lines for the first few months of opening, but I would recommend heading to this ride for rope drop when the park first opens. I think an ideal itinerary would be a FastPass for Slinky Dog, rope drop for Mickey & Minnie’s Runaway Railway, and then heading to Galaxy’s Edge for Smuggler’s Run. If Rise of the Resistance opens up as a FastPass, however, then this advice will absolutely change!

As the tier two FastPasses go, there’s lots of choice now. You can go for the thrill rides by picking Tower of Terror and Rock’n’Roller Coaster, or add in the other two Toy Story Land rides by choosing Alien Swirling Saucers and Toy Story Mania. You can even pick Star Tours and ride two out of the three Star Wars rides!

The shows such as Beauty and the Beast Live on Stage, the Frozen Sing Along, and the Indiana Jones Stunt Show are still really unnecessary to FastPass since their capacity is so large, and Fantasmic! is still a great fourth FastPass choice once your three have all been used up.

The options here are limited, and pretty much decided by the height of those in your party. If all of your traveling party are over 44 inches and like rides that are a bit more daring, Flight of Passage is the obvious choice. This is the hardest FastPass to ever find, and wait times can creep up to three hours during busy times.

If your party doesn’t meet the height requirement or you’re looking for something a bit tamer, then Na’vi River Journey is still a good FastPass option since it’s a short ride that you really don’t want to waste a lot of time waiting for (it’s also one of my most recommend Disney World riders for toddlers!)

FastPass Secrets insider tip: if some of your party want to ride Flight of Passage but others aren’t tall enough, remember to take advantage of Disney’s Rider Swap option for much shorter wait times!

Animal Kingdom has some great options for a second choice, and are pretty dependent on the people you’re traveling with. Thrill seekers should probably go with Expedition Everest, Dinosaur, or Kali River Rapids and animal lovers should definitely choose choose Kilimanjaro Safari.

FastPass secrets insider tip: If you’ve got your FastPass booking day coming up and you want a copy of the Disney World FastPass tiers handy, you can click on the image below to print off a PDF copy of the tiers (or click on this link). This is useful to have in case you find that one of your choices has gone, and you’re not having to scramble to find the tiers as you look for a different FastPass to book. 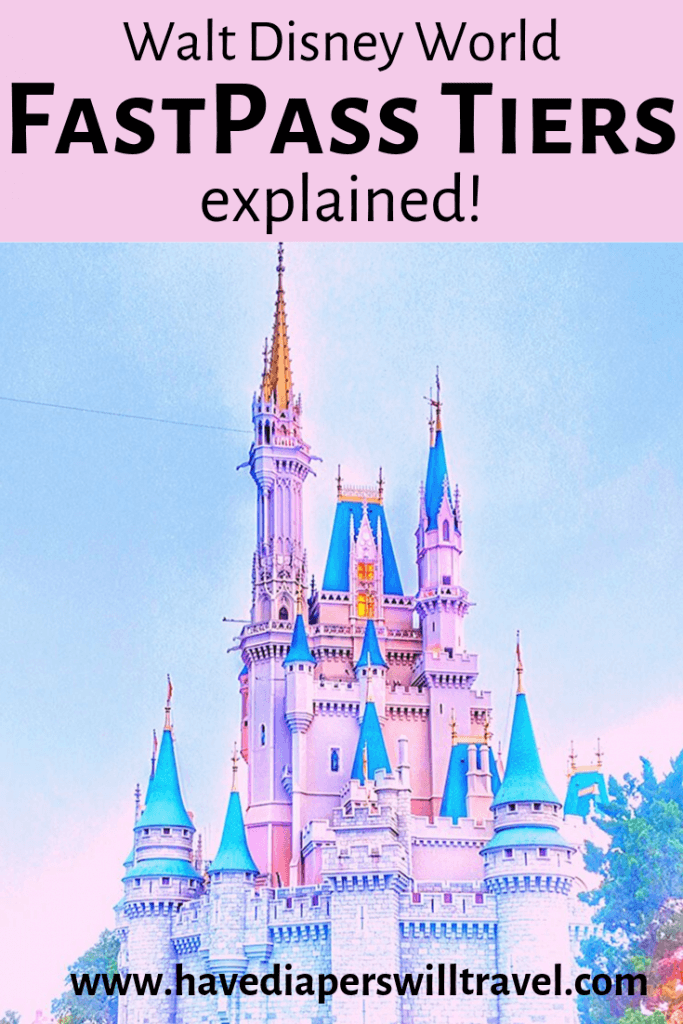 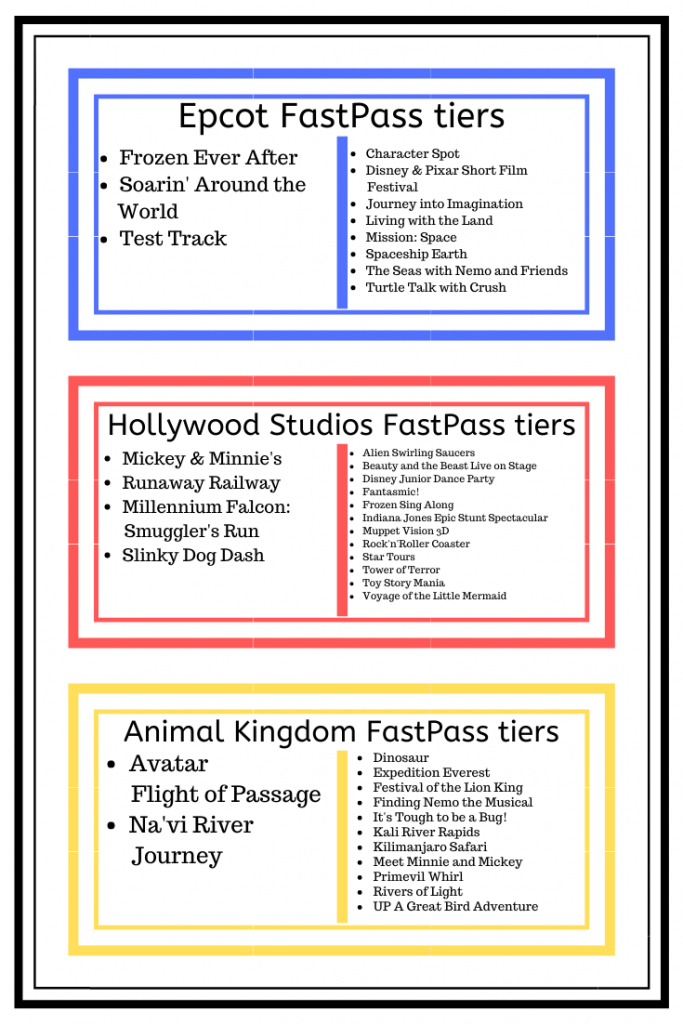 How do you feel about the Disney World FastPass tiers?

Our experience on the Disney Skyliner (and what you need to know before you ride)
← Previous
The best shoes for Disney World (for adults and kids)
Next →
Comments are closed.